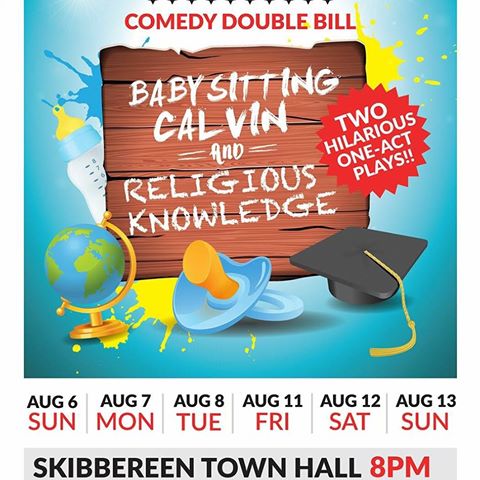 The first play, “Babysitting Calvin” by John H Newmeier, features three newcomers to the Skibbereen stage, Paul Delaney, Maura Cunningham and Greg Watkin, as well as regulars Isobelle Nealon and Mary O’Driscoll. The play tells of 10-month-old Calvin’s (Paul Delaney) efforts to prevent his babysitter Laura (Maura Cunningham) from indulging in too much hanky-panky on the sofa with her friend Bob (Greg Watkin) while his mother Katie (Isobelle Nealon) and her pal Donna (Mary O’Driscoll) are out on the town. Few will believe that a 10-month-old in a play pen could cause so much havoc!

The second play, “Religious Knowledge” by Eamonn Kelly, takes us back to the classroom of a Christian Brothers’ school around 1970, and the hilarious spectacle of the brother (Fachtna O’Driscoll) trying to teach his disinterested class (Ger Minihane, Kevin Cadogan and newcomer, Joe O’Sullivan) his version of Irish History, Religion, Sex Education, and Singing, again with some crazy, off the wall consequences.

Both plays are directed by Fachtna O’Driscoll and stage management is by Angela Galvin, assisted by Una Murray and Sinead Cripps. Sound is by Fachtna Hamilton, lighting is by Gearoid MacEoin, while Barty Connolly and Charlie Keohane complete the stage crew who have to come up with two stage settings on the one night!

The double bill opens in Skibbereen Town Hall on Sunday 6th August and continues on bank holiday Monday 7th and Tuesday 8th and again on the following weekend: Friday 11th, Saturday 12th and Sunday 13th. Performances are at 8.00 p.m. each night. Bookings at Thornhills Electrical, Bridge St (call in or phone 028-22557) or may be purchased at the town Hall from 7.30 p.m. on show nights.