Skibbereen Theatre Society won the Best Presentation award in the 2015 All-Ireland Confined Drama Finals in Kilmuckridge, Co Wexford, this weekend with their production of Family Plot by Darragh Carville.

The overall winners were the Kilrush Drama Group from Co Wexford with local playwright Billy Roche’s Poor Beast in the Rain. As well as winning the Best Presentation award, the Skibbereen group was also nominated for Best Lighting, while Carmel O’Driscoll and Ger Minihane were among the nominees for the Best Actress and Best Supporting Actor, respectively.

The West Cork group performed on the opening night on Friday, April 10th. Even though opening night is considered not to be the best one of the nine to be drawn for, their performance received a good adjudication from Patrick Sutton, setting the bar high for the other groups.

To mark its 40th anniversary year, Druid is embarking on a major artistic undertaking nationwide that will take in Skibbereen Town Hall at the end of June.

DruidShakespeare is a new adaptation by Mark O’Rowe of four plays, Richard II, Henry IV Parts One and Two and Henry V, in two parts, directed by Garry Hynes, which will be presented at Skibereen Town Hall on Monday, June 29th. The performances will begin at 5pm and last around six hours with a meal break between the two.

Tickets, costing €60 each (concessions €52), for DruidShakespeare will be on sale online for all venues nationwide from 10am this Thursday, April 16th, on www.druid.ie or through 091-568660. Next week, a limited number of tickets will be available for purchase over the counter at Thornhill Brothers Electrical, Skibbereen.

Druid has this week announced full details of one of the company’s most ambitious ever undertakings, DruidShakespeare, a challenging but fitting project to mark the company’s 40th anniversary year. An epic story of families and wars and the making of nations, DruidShakespeare is an exploration of English history through an Irish lens.

‘The question we are asking is how, in the context of the historical relationship between Ireland and England, do we as Irish artists produce these plays today?’ says Druid artistic director Garry Hynes, a Tony-award winner.

With an ensemble cast of thirteen actors, this major new theatre event will premiere in Druid’s home, the Mick Lally Theatre in Galway, before embarking on an extensive Irish tour to Letterkenny, Sligo, Castlebar, Limerick, Skibereen and will premiere internationally in New York at the prestigious 2015 Lincoln Center Festival.

In August Kilkenny Arts Festival, in association with Druid, will present a site-specific production of the plays in the castle yard where Richard II stayed when fighting his ‘Irish wars’.

Skibbereen Theatre Society is on its way to the All-Ireland Confined Drama Finals in Kilmuckridge, Co Wexford, having been drawn to appear on the opening night, Friday, April 10th.

In preparation, they will be putting on the two final performances of their award-winning production of Family Plot by Darragh Carville at Skibbereen Town Hall on Easter Monday, April 6th, and again on Wednesday 8th, with curtain at 8pm each night.

This darkly-comical piece is set beyond the grave, featuring four generations of the dysfunctional and dead Kerr family, Aunt Lizzie (Angela Galvin), Da (Ger Minihane), Ma (Catherine Field), Frank (Fachtna O’Driscoll) and Tess (Carmel O’Driscoll), who didn’t get on in life and they certainly don’t get on in death! They are about to be joined by the youngest, Emer (Isobelle Nealon).

Family Plot, directed by Hilda Hegarty and Fachtna O’Driscoll, won four festivals on the amateur drama festival circuit and finished second in the other three they entered to qualify comfortably for the All-Ireland finals. 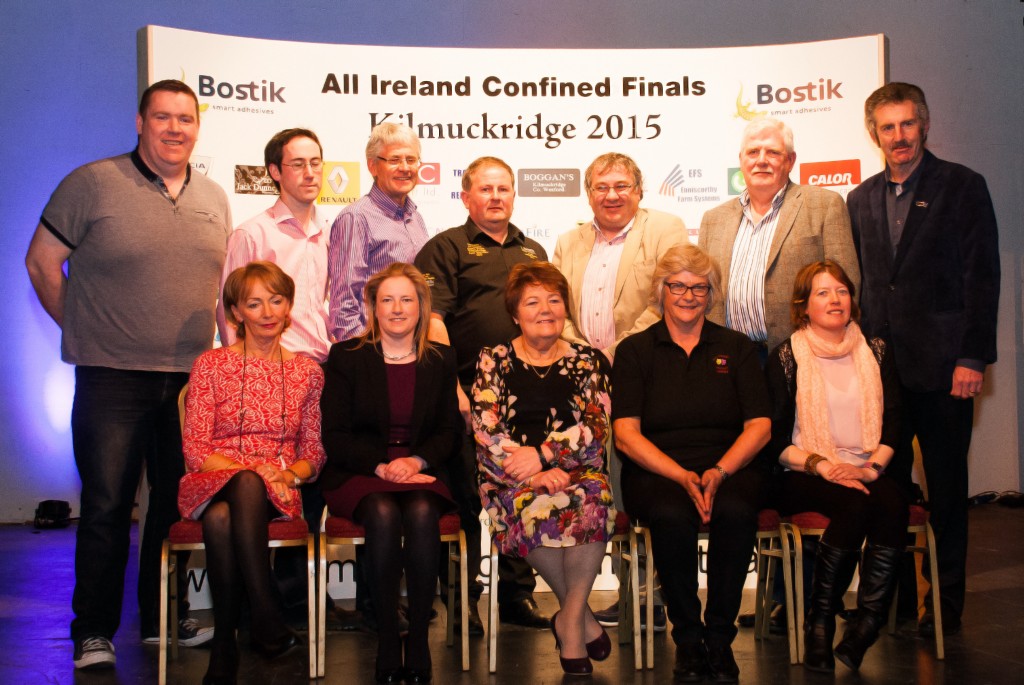 Representatives of the groups that have qualified for the All-Ireland Confined Drama Finals, pictured at the draw in Kilmuckridge. Back row, on right, is Skibbereen’s Fachtna O’Driscoll