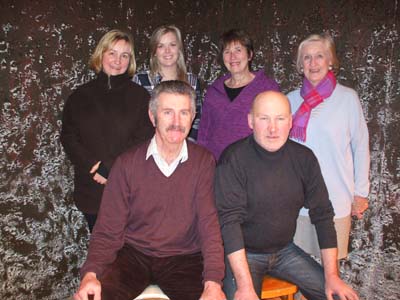 The latest production from Skibbereen Theatre Society is ‘Family Plot’
by Daragh Carville, which opens at the Town Hall on Wednesday next,
February 25th, 2015 with a wine reception at the interval. There will
be three further performances there – February 28th, March 1st and 4th
– before the group embarks on the amateur drama festival circuit,
which includes the West Cork Drama Festival in Rossmore on St
Patrick’s Night.

Most people’s definition of hell is being locked in a room with their
nearest and dearest for more than 24 hours. Look at Christmas: By St
Stephen’s Day everyone is ready to run to the hills!

So, imagine being stuck six feet under with your close relations for
the rest of eternity. This is the terrifying idea behind Daragh
Carville’s latest play, ‘Family Plot’. This darkly-comical piece is
set beyond the grave, featuring four generations of the dysfunctional
and dead Kerr family, Aunt Lizzie (Angela Galvin), Da (Ger Minihane),
Ma (Catherine Field), Frank (Fachtna O’Driscoll) and Tess (Carmel
O’Driscoll), who didn’t get on in life and they certainly don’t get on
in death! They are about to be joined by the youngest, Emer (Isobelle
Nealon).

‘Family Plot’ is directed by Hilda Hegarty and Fachtna O’Driscoll.
Tickets are available in advance from Thornhill Electrical,
Skibbereen, tel 028-22557.