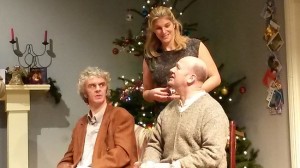 Action from Skibbereen Theatre Society’s production of “Many Happy Returns”

Skibbereen Theatre Society’s production of “Many Happy Returns” lived up to its billing as a “hilarious seasonal comedy” on December 29th last. Directed by Hilda Hegarty, the play proved a big hit with the opening night audience at Skibbereen Town Hall. The welcome at the door, the magnificent set and the complimentary teas and coffees at the interval enhanced the atmosphere.

The cast had great characterisation and huge energy in their roles. The result was some very fine acting which brought out all the fun of the play.

The play is set on Christmas Eve in present day. Declan (Eugene McCarthy) and his wife Amanda (Breda Herlihy) are coming for a Christmas visit. In an effort to impress them, Irene (Mary O’Driscoll) has planned a Christmas event complete with flashing reindeer and snowmen.

Her husband Arthur (Declan McCarthy) is a reluctant participant. The audience is highly entertained as we watch the plan descend into hilarious mayhem! The antics of Irene’s dad Matty (Kevin Cadogan) and the return of her mother Gladys (Terri Kearney) in the midst of it all only adds to the consternation.

This was an excellent production of a very funny play and is truly a great night’s entertainment.
As there is only one performance left, on Saturday, January 3rd, 2015, booking is advisable. Tickets at €10 are available from Thornhill Bros Electrical or phone 028-22557. 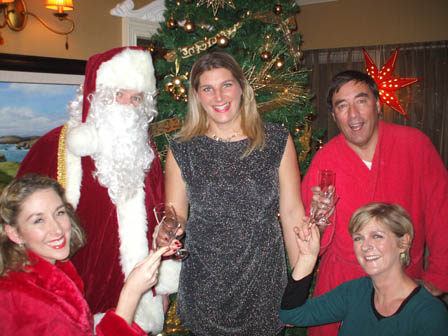 Skibbereen Theatre Society’s Christmas comedy production, “Many Happy
Returns” by Bernard Farrell, will be staged over the holiday period.

It will be playing at Skibbereen Town Hall on Monday, December 29th,
Tuesday 30th and again on Saturday, January 3rd. Tickets are available in
advance from Thornhill Bros Electrical, Skibbereen, tel 028-22557.

Set on Christmas Eve in a farmhouse on the edge of town, “Many Happy
Returns” tells the story of Irene (Mary O’Driscoll) and Arthur (Declan
McCarthy), who have Irene’s father Matty’s house festooned for the return
of Declan (Eugene McCarthy), the self-made millionaire from New Zealand and
his Kiwi wife Amanda (Breda Herlihy).

If everything goes to plan, Arthur’s future is secure – and it would – if
Old Matty (Kevin Cadogan) were not around to listen at doors. Old memories
are rekindled and much catching up takes place before the whole evening
takes a sudden turn for the worst as Irene’s mother Gladys (Terri Kearney)
shows up and matters get out of hand.

This is rated as one of Bernard Farrell’s funniest plays and the cast has
been rehearsing, under director Hilda Hegarty for the past few weeks.