Aidan Dooley awakens another hero in our midst with his new show which will he will be performing at Skibbereen Town Hall at 8pm on Tuesday, 17th September, 2013 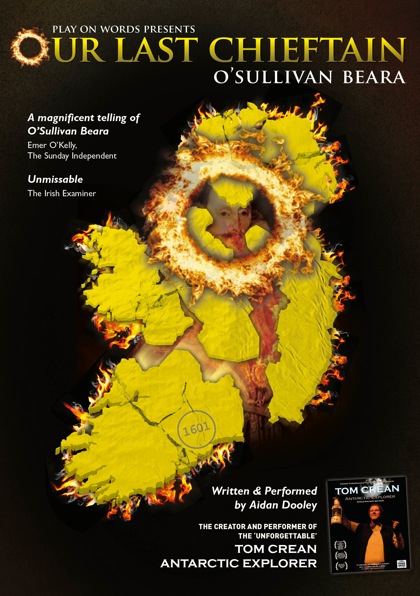 Fresh from the theatrical phenomenon that is “Tom Crean Antarctic Explorer”, its creator and performer Aidan Dooley, returns with the Irish tour of his one-man show“OUR LAST CHIEFTAIN – O’Sullivan Beara”. This is the epic story of a Gaelic Chieftain who refused to surrender and “audiences won’t be disappointed.”

In the show Aidan Dooley awakens a forgotten Ôgreat’ in Irish history. O’Sullivan Beara was the last Rebel left standing against the Crown after the Battle of Kinsale in 1601. Using Celtic myths, an original score and brilliant storytelling, Aidan tells the true tale of how this heroic leader of the people of Beara tried valiantly to save his Clan against the vicious onslaught of the angry Tudor Queen Elizabeth, intent on ensuring Ireland would never aid the Spanish again. In doing so she destroyed the last embers of Gaelic governed Ireland.

Emer O’Kelly of The Sunday Independent said of the show: “As an author, Dooley’s heart is on his sleeve; as an actor it is used with craft and skill. And the combination is pretty much irresistible” and “In Ireland we like our Heroes tragic and Dooley gives our preference full and magnificent measure in his telling of O’Sullivan Beara’s last years. Audiences won’t be disappointed”.

Described as “unmissable” by the Irish Examiner.